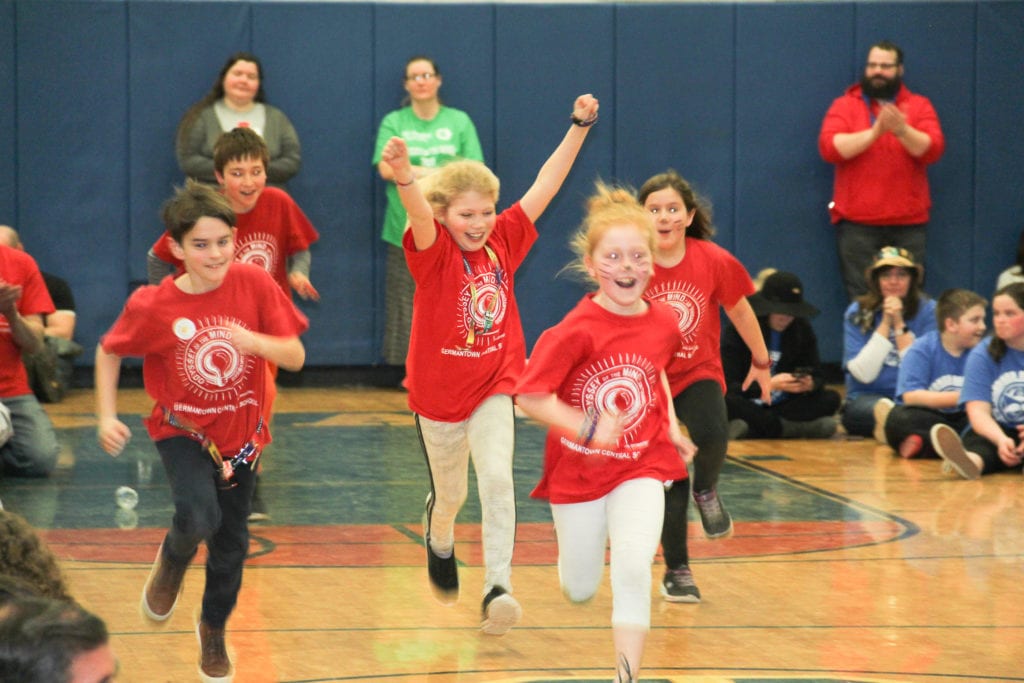 A team from Germantown Elementary School runs to receive their award.

Twenty-seven student teams from schools in Rensselaer, Columbia and Greene counties advanced to the state Odyssey of the Mind tournament in Binghamton on March 23 (click here for the full results). They were selected from 94 teams competing in the Region Four Odyssey of the Mind Tournament coordinated by Questar III at Coxsackie-Athens Central School District.

Odyssey of the Mind is an international educational program that provides creative problem-solving opportunities for students of all ages. It encourages students to use their imaginations and to work in teams – skills that will be useful throughout their lives.

On March 9, teams performed creative skits they developed to demonstrate their solutions to open-ended problems without a specific right or wrong answer. Teams were judged on their unique solutions to the problems, as well as their teamwork, creativity, ability to think out of the box.

Congratulations to the following teams representing our area at the state competition in Binghamton:

Problem 1: OMER to the Rescue Again

Who better to help those in distress than OMER? In this problem, OMER and his trusty Sidekick travel to different places with suitcases holding all of the parts of an OMER-mobile vehicle! OMER and his Sidekick will assemble and ride on the vehicle where it will function in different ways to “save the day.” Between attempts, the vehicle will be disassembled, put back into the suitcases, and taken to a different area where it will be reassembled and driven again. Finally, the OMER-mobile is thrown a hero’s parade as a show of appreciation!

Teams take a cue from nature in this problem where they create and build a team-made mechanical creature that hides in plain sight. The creature will change its appearance three times to avoid being detected by a Searcher Character trying to find it. The way the creature changes will be different each time! The team will create and present a performance where its creature gets into – or out of – various situations using this resourceful skill. In the end the creature will surprise everyone by changing its appearance a final time and reveal its true self.

Imagine how inspiring Leonardo DaVinci’s (LDV) workshop must have been. Teams will portray his workplace in an original, creative performance that includes LDV, a patron, and a naysayer. The team will recreate a DaVinci painting, make a three-dimensional representation of one of his works, and recreate another LDV work in any form the team wishes. There will also be an original “debunked” creation that LDV “invented” but discarded because it was mocked. Ironically, the item will be shown as something commonly used in modern times.

Step right up and put your structure to the test! Teams must strategize risk for points and “toss” their structures in this year’s problem-turned-carnival. They will use a device to propel the structure in a carnival game. If it travels in the air it gets higher score! Once the structure has been successfully tossed, it can be tested for strength. A carnival barker character will entice other characters to join the fun during a performance that incorporates testing the structure’s strength with creative games of skill and chance.

Disagreements can distract groups from seeing the bigger picture. Teams will create and present a humorous performance about a sneaky character that distracts others while trying to take control of anything the team wishes. In the performance it will lure others into silly arguments and be successful two times. The arguments will be presented using different dramatic styles and will include attention-getting effects. In the end, the groups will learn that they have been intentionally distracted and will catch the sneaky character before it takes control.

Teams from 11 different school districts advanced, including five from Hoosic Valley, four from Brunswick and three from Lansingburgh. At least one team from Region 4 has advanced to the world finals every year since 2007.