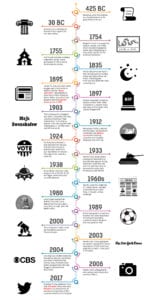 INFOGRAPHIC: The History of Fake News

These are just a few of the items that today’s students face when it comes to doing research and seeking information.

How well are students differentiating between fact and fiction?

A 2016 report by Stanford University found they were easily duped by online information. Perhaps more troubling, this research started well before the President popularized the term “fake news” during his campaign.

This lack of news/media literacy has serious consequences for our country and democracy.

What can we do to combat this growing availability and acceptance of dubious information?

The co-author of the 2017 Stanford report said that skepticism is useful. So too are good-old fashion research skills.

As educators and parents, we need to teach our students and children how to effectively evaluate the credibility of information – and avoid being bamboozled by unreliable, deceptive or perhaps nefarious efforts.

And let’s face it, there are many efforts today, from spoofing and spamming to concerted efforts to discredit or sabotage the press.

This is not a new phenomenon, but the growth of the Internet and social media exponentially increased the amount of user-generated content. It has also empowered individuals to troll and easily spread information without verifying its authenticity.

We need to teach students (and perhaps adults as well) to be more than just consumers of that information; we need them to act like journalists or fact checkers that avoid putting fake news into reports. With the rise of social media and smartphones, anyone can be a reporter and share news as they see it.

For example, you may remember the case of the young girls who were denied boarding a United flight because they were wearing leggings. The outrage was immediate and widespread, because no one dug deeper before reporting the story. Come to find out, the airline was fully within their rights and enforcing their policy. The girls were “travel pass” passengers, a benefit provided to United employees and their families that comes with additional requirements (including a dress code). If the “reporters” who first shared the story on social media had done a little journalistic legwork rather than just assume they had all the facts, this case would likely not have been national news for a week.

In some cases, we may be doing our students a disservice by trying to limit results by filtering websites in school. This keeps this information from ever being accessed and assessed – preventing students from learning how to truly evaluate different sources.

When I was younger, you had to find and evaluate multiple sources using less sophisticated technology. Today, students instantaneously have access to millions of Google results – which are not sorted by reliability – and these sources can be quickly shared without proper scrutiny. Additionally, Wikipedia, YouTube and Facebook have become a primary source of research for some.

Let’s face it, it is increasingly difficult to sort through the “noise” competing for our attention. Just consider this – in 2010, Google CEO Eric Schmidt said that we now create as much information in two days than we did from the dawn of man through 2003.

Guess what? That number only continues to grow. In 2016, 44 billion GB of data was created per day. This includes 48 hours of new YouTube video, 571 new websites and 204 million emails every minute. This is projected to increase to 463 billion GB of data by 2025.

Imagine living in a world with nearly 1,000 percent more data and information? It is coming.

This is why we need to teach our students these media skills – to act like editors and librarians who seek, sort and evaluate information, not rely on the most immediate results.

When information was scarce, librarians acted as gatekeepers and herders of information and data. Today, they are teaching young people not only to find, but to assess across multiple sources.

This work shouldn’t just happen in the library. It needs to happen in the classroom too, across content areas and at all grade levels. With technology integration moving deeper and deeper into our curriculum, it is imperative that students are able evaluate sources throughout the entire educational system. Questar III’s School Library System and Model Schools programs support our local school districts with these efforts.

Meriam Library at California State University in Chico created the perhaps aptly-named CRAAP Test to determine whether information is reliable. The evaluation criteria is:

Our efforts to teach our students these important media literacy skills offer us an opportunity teach them about our past and the evolution of technology and communications. After all, fake news may seem like a modern-day phenomenon, but it is not. In fact, 2017 is actually the 2,500th birthday of the father of history and fake news, Herodotus.