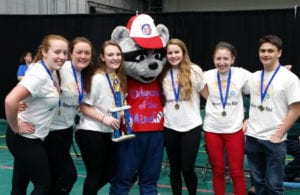 Five local student teams advanced to the Odyssey of the Mind World Finals May 23-26 at Iowa State University in Ames, Iowa. This is the 12th straight year that a team from the Questar III region has advanced from the state competition held in Binghamton.

Congratulations to the following teams:

They were among the 22 local teams that advanced to the state competition from the regional competition coordinated by Questar III at Rensselaer CSD last month.

Teams from the Region 4 area of Rensselaer, Columbia and Greene counties have done well at the state level in recent years.

Odyssey of the Mind is an international educational program that provides creative problem-solving opportunities for students of all ages. It encourages students to use their imaginations and to work in teams – skills that will be useful throughout their lives.

Teams are judged on their unique solutions to the problems, as well as their teamwork, creativity, ability to think out of the box, and in excelling (i.e., going above and beyond) throughout the competition.