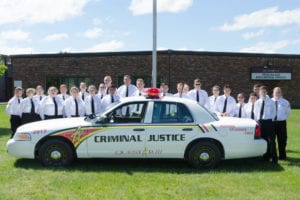 The Criminal Justice Class poses with “Betsy II” after her unveiling Wednesday morning.

Students in Questar III’s Criminal Justice program at Rensselaer Educational Center in Troy have a new tool to make their training as realistic as possible. Rensselaer County Sheriff Patrick A. Russo donated a patrol car to the program to give the students updated technology for training.

Until now, the class had used a 1992 Ford Taurus (affectionately named “Betsy”) for practicing traffic stops, field sobriety tests and other tactics. Criminal Justice Teacher Amy Gillett says while the Automotive Technologies class kept the vehicle running when needed, nothing can replace having updated equipment.

“They’re going to learn on modern equipment, something they’ve never had in a patrol car. We did the best we could with what we had, but this is modern and it’s going to add a legitimacy to the hands-on component of what they’re learning. They’re actually learning on real equipment the real skills and real tactics that police officers learn and use on the street,” Gillett says.

The 2005 Police Interceptor (named “Betsy II”) includes working lights and sirens, a PA speaker and divider between the front and back seats. At first glance, it might be hard to tell the car is more than 10 years old, and was on the road for the Rensselaer County Sheriff’s Office. Von’s Garage of Troy gave the vehicle a fresh coat of paint, and No Name Graphics Sign Company applied the custom graphics.

Sheriff Russo says after visiting the program and talking with Gillett he wanted to find a way to help.

“She had mentioned the old car was having a bunch of problems, so I talked to my Undersheriff to see what we had. We were able to find something in good shape and for what they need I think it’ll be a perfect fit. It was a team effort for a good cause.” 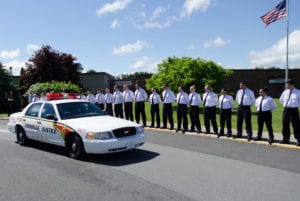 The class catches their first glimpse of the new cruiser.

“The donation of the car symbolizes the close partnerships that have been built between the Criminal Justice Program, local law enforcement agencies and businesses. It demonstrates how CTE programs can provide local businesses and community agencies with students who have a willingness to learn and an eagerness to work in a particular field.”

The vehicle was donated by the Rensselaer County Sheriff’s Office and painted by Von’s Garage. The custom decals were designed by Troy Police Officer Ralph Southworth, and printed and applied by No Name Design & Graphics of Troy. Funds for the work were donated by Troy Police Cadet Post 4102 and the Troy Police PBA.

We’d like to extend our sincere thanks and gratitude to all who made the donation possible!

See more photos from the big reveal on our Facebook page: